The meaningful use of eGovernment services brings a vast potential for the optimisation of interactions between citizens and state of all kinds. Studies show that approximately 59 per cent of the time a citizen has to deal with such affairs would be cut through an increase of awareness of eGovernment services (Normenkontrollrat 2017). In the line of a more wider spread use of eGovernment, administrative duties will not only be eased for citizens, but also to a large degree for the federal Bureaus itself.

Looking at the European standard in usage rate of digital governmental services, Germany ranks low with only 33 per cent compared to the 52 per cent that is the European average (eGovernment Benchmark 2017). Despite the ever so rapid digital development in all seemingly all parts of life the use of eGovernment services has even gone back in Germany since 2012, according to a study brought up by the initiative D21 (Initiative D21 2017). 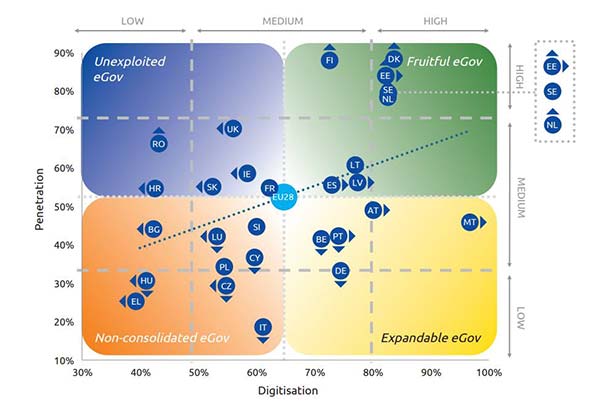 However, the in contrast to the harsh truth of these low averages and negative trends, the “digital skills“ of Germans compared to other European and western countries are above average (Initiative D21 2017). Also, the range of eGovernment products is average to slightly above average (eGovernment Benchmark 2017).

Analog to the decrease in usage of eGovernment naturally comes a decrease in customer satisfaction towards these services (Initiative D21 2017).

So what can you do to increase the usage rate of eGovernment services in Germany?

Our solution to this problem is based on the further integration of citizens in eGovernment. eGovernment has to ease the life of the citizens to it being a lucrative technology! Exactly that is where our system comes into play!

With our Citizen’s Assistant, we forge a simple and very practical way of optimising the interaction between citizens and government. The Citizen’s Assistant sends a fully automatically individually optimized notification for upcoming affairs dealing with the federal administration such as renewing one’s ID-card. The first step would be to establish this system for ID-Documents such as ID- Card passport or driver’s license. The federal bureaus can remind the citizens before an ID-document runs out. Furthermore, it can, in collaboration with the citizens, control and optimise course of the appointment at the bureau. Our system also serves as a great platform to present already existing eGovernment services and also introducing new ones. Primarily the notification and information is to come via cost free Email. In order to increase the value of this system, we also plan to introduce SMS and letter post as our channels of information.

The Citizen’s Assistant will increase the usage rate of current eGovernment services to enhance efficiency when dealing with authorities. Simultaneously the assistant grants the citizens a greater amount of comfort. The effort needed to put our idea into practice is extremely low; moreover, it doesn’t touch personal data, while not reinventing the wheel.

Looking at the scalability of our system, we can increase the use cases even to things affairs like elections on various levels. We are also looking forward to further improve the personalisation of our services to continuously provide a higher level of pleasure and comfort.

For the User the Citizen’s Assistant grants a significant increase of comfort and pleasant when dealing with administrative duties. The Government itself also profits from our system by raising awareness to eGovernment services and specific notifications in order to pilot the course of the interactions between government and citizens (SALZBURG24 2017).

How is the Citizen’s Assistant supposed to work?

Our main objective is to keep the time spent, dealing with administrative duties to a minimum. In pursuance of doing so, we combine the already available information (Expiry Date) with the respective email address of the citizen. Effectively the form only has to be extended with the email address.

Concrete we have the following running shows:

Our system is simple and easy to understand for everybody. A common reason against eGovernment, especially in Germany is the misusage of personal information- we don’t even touch those! Therefore date privacy concerns are not an issue. The Citizen’s Assistant reduces administrative burdens as well as well as raising attention to already existing eGovernment services in pursuit of increasing content towards administrative duties.

We as a group have developed a more and more professional way of turning our enthusiasm into productive results, and we are only getting started.

Our strive for more influence when tackling social economic problems has never been stronger, and we are looking forward to keeping on pressing forward, evolving from only a shared mindset to a real concept that is only waiting to be established.

Our school takes great interest in digitalisation, offering various computer labs, iPads during lessons as well as establishing a digital absence list for teachers and their peers. Moreover out school has the technological know-how to obtain the MINT-certification.

A dashboard showing all the cancelled lessons and substitute teachers was a static screen in our main hall- now teachers and students developed an application for Android and Apple to check this dashboard mobile.  Just furthermore proof for the digital steps our school is taking with us.

These traits and actions of our school that they are already taking being keen on the idea of the digital revolution, we are very content having our school as project partners, especially on our certain topic.

We are all we are all around the age of 16 to 18. Thus we started to gain our first experiences in interaction with federal policy and bureaucracy (registering for our driver’s license). As you might have thought, none of them was really pleased, due to the endless seeming queues followed by even longer latency. Therefore it was a no-brainer for us to decide on this particular subject. The interesting part of this subject is, we don’t have to invent any new technologies, because all of it is already available. To underline this fact, you can take a look at Estonia´s wide variety of eGovernment services which around 70% of the population use-compared to Germany´s 15%. So our task has to be to find possible ways of making E-Government more attractive for everyone in Germany.

But why should we even do that? Why is E-Government even a good concept? Is it safe?

E-Government, like everything else you do on the internet, has the risk of people obtaining personal information and we don’t want to in any way exalt that. The fact is, however, the time and effort that is spared, by not only the citizens but also the federal institutions would be drastic. The argument of saving money through the wider usage of E-Government services is also one not to be looked away from. All in all, no matter how you twist it or turn it, E-Government would help the whole society, but this very society isn´t aware of this fact yet enough. Hence, on behave of this project we must raise the level of acceptance and awareness towards E-Government to save money, effort and time, time that a normal middle-class worker these days just can’t afford to lose, but at the moment however does. 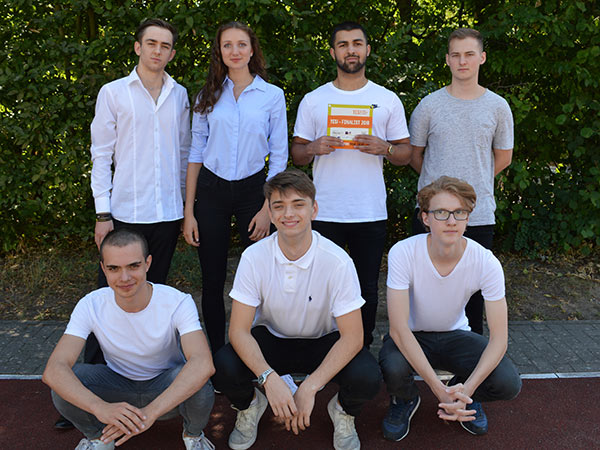 While digitalisation has been present for long and on the rise in all areas of life, the digitalisation of public administration in Germany is still in its infancy. Compared with other countries, Germany is only in the mid-range concerning eGovernment, at the most. The result of this is an inefficiently organised bureaucracy, the harmful effects of which can be felt by citizens by way of unnecessary official procedures, long processing times and mediocre quality.