The rental market’s situation has been tense for several years. There is a severe excess demand, particularly in larger cities. This is primarily apparent through the current lack of over one million apartments in Germany. Obviously, this leads to increasing rents. Additionally, there is an allocation problem which makes it certainly difficult to find affordable housing especially for low-income groups.

But why has living space become so expensive in larger cities? One reason for this development is the increase of construction costs on the supply side (increase of 27% between 2000 and 2014). Another reason are the increasing regulatory requirements, i.e. fire protection and accessibility. These factors play an important role (increase of 18% between 2000 and 2016). On the demand side, internal migration causes a problem: More and more people move to larger cities, which eventually requires more and more living space. Due to demographic change and singularization, the number of households increased by 17% between 1991 and 2017. Consequently, more apartments are urgently needed. The constantly increasing number of students also plays an important role here. The number of university students increased by 28% between 2010 and 2018 which also led to a higher demand for rental apartments. However, it is precisely this population group, among others, that holds problems with paying higher rents. Therefore, we decided to tackle the problem at this point and improve the living conditions of the students with our solution. 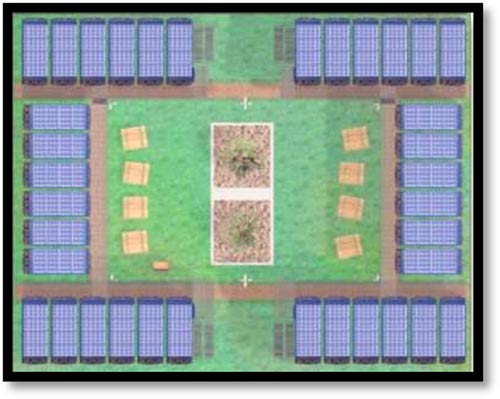 Exactly these aspects are fulfilled by our solution: Container4u. Essentially, Container4u is a concept for a further developed type of student residence, which enables students to live in an affordable and sustainable way in a central location in the form of a container settlement. For this purpose, second-hand and therefore less expensive containers will be purchased. On the one hand, this saves financial expenses, and on the other hand, it is also more sustainable and eco-friendlier.

Additionally, containers have the advantage to be stackable and be combinable in any desired way. In particular, this means that they can be installed in smaller areas in city centers which are still vacant due to their small size. In this way, we can offer students an attractive living location close to their university. Within one settlement, the individual student can rent a container, so they have their own apartment. Nevertheless, the community aspect, which is important for many students, would not be missed in such settlements. Some containers could also be converted into common rooms or common kitchens.
In the course of planning Container4u, we have particularly taken the sense of community into account. We would arrange the containers in a certain way that an inner yard will be formed. This inner yard can be designed as desired, so from our point of view students themselves should have the opportunity to present ideas and suggestions according to their own interests and needs for the design. In terms of a basic design, we decided to stack three containers on top of each other in order to create living space as effective as possible. However, this is of course also variable. Stairs on the exterior wall lead to the higher floors. The individual containers can be reached comfortably via interconnected balconies.

As far as the energy supply itself is concerned, we take up the sustainability aspect again. The settlement will be supplied by solar energy. Thanks to our own electricity storage system electricity will still be available even if the sun is not shining.

Therefore Container4u actually provides everything for students’ need in a student residence. This solution is also an excellent approach to curb the problem of affordable rents in large cities.

Shortage of housing, gentrification and rent madness: How can affordable housing be managed in cities?

by Insa Weilage, Center for Economic Studies (CWS) at the Leibniz Universität Hannover

Rising rents, especially in conurbations, characterise the German rental housing market. Demand, which has been growing for years, contrasts with an almost rigid supply of housing. This supply problem results in a distribution problem („allocation problem“): Concerning their space requirements, low-income groups such as low-income earners, families, students, and pensioners have more significant problems finding housing. At the same time, these population groups are disproportionately burdened by rent increases. For example, between 1993 and 2013, housing costs for households with the 20% lowest incomes increased by 32%, while they decreased by 9% for the 20% highest income households (Dustmann, Fitzenberger and Zimmermann, 2018, 12-13).

Existing measures (such as rent control, housing subsidies and social housing) and new proposals (e.g. rent-to-own, Gründling and Grabka, 2019) address the supply and allocation problem differently. There is no panacea, as all measures have advantages and disadvantages. Often there are unforeseen and unintended consequences.

What are the current solutions? What empirical evidence is there on success and side effects? Can a stronger regionalisation of policy measures help or, on the contrary, are higher, more financially robust political levels required? And how does the trend towards home offices through Corona change housing demand and supply? Finally, how can measures be designed, e.g. in the region of the participants, to improve the status quo?

Looking at the students‘ regional housing market can help bring the abstract discussion of measures to life. In addition, it is probably helpful to focus on a specific group, e.g. „Student housing 2.0“, „Strengthening infrastructure/the surrounding area/…“ etc.