Zum Inhalt springen
Eutiners in the State Capital – It Begins!

Eutiners in the State Capital – It Begins!

This was a big day for everyone – not only because we visited the state parliament before our YES!-Kick-Off meeting (and arrived late and dripping with sweat at the ZBW Kiel for that reason) – but also because now, finally, the starting gun had truly been fired for our project! 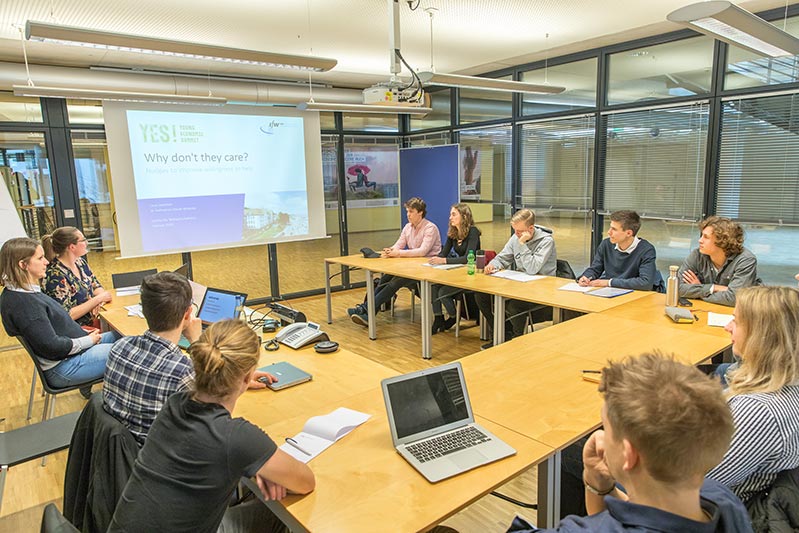 We were pretty astonished, to say the least when we entered the boardroom of the ZBW: A very personal atmosphere, professional support and interesting conversations were waiting for us – We did expect that this project would be grand, but such a warm welcome was certainly motivating! After a nice introduction of all the participants, we dove right into our issue with Kai and our scientific advisors, Katharina and Lena: Searching for nudges that persuade people to be more ready to help each other in conflictual situations.

A first glimpse of the subject

What first seemed like an abstract and pretty difficult topic, in reality, turned out to be a problem that is easily identifiable in many parts of life: Be it at accident sites, in environmental care or cyber-bullying, everywhere there is a lack of people that are willing to help. Especially people who need help in open spaces are often left to their fate. Science, which has been investigating this problem since the late 1960s, tells us that there are multiple psychological motives for this behaviour. The bystander effect, meaning the missing sense of responsibility while being part of a group, the insecurity of people (about practising first aid, etc.) and time pressure are common reasons for lack of intervention in a potentially dangerous situation, many studies have confirmed.

What can be done about this?

Of course, nobody can be forced to help, even if denial of assistance is punishable by law. But would this even be the correct way? To punish people for not helping?

The team quickly agreed: There has to be more positive enforcement for people that are willing to help. Or one develops a nudge. This should be an action that would influence the behaviour of single individuals or even a whole society, all without pressuring anyone by punishing those who do not follow. As an example, one can look at the paradigm shift from opt-in to opt-out in organ donation: When people actively have to opt-out of their organs being donated to other people in need post-mortem, there will be a substantially bigger amount of donators than when one had to act to make it possible in the first place.

Logical. But to “reinvent the wheel“ in the context of willingness to help will be our task in the near future.

We of the Carl-Maria-von-Weber-Schule Eutin are definitely looking forward to the near future, which will undeniably be hard but will also grant us exciting insights into the world of science.

For those who want to further explore the world of nudges, we have linked two helpful YouTube videos below.