Only five days after the first regional final, we were already heading north, where the YES! once had its origins. Six teams had survived the corona months, continued working despite school closures and were finally allowed to present their ideas. The Gymnasium Buckhorn Hamburg and the Immanuel Kant School from Neumünster prevailed.

Usually, the regional final in Kiel is a home game for us. And although we all could only meet at the screen, it almost felt like it. Maybe it was also due to the comparatively small group because we only had two mini finals of three, from which the two representatives for the northern region should arise. 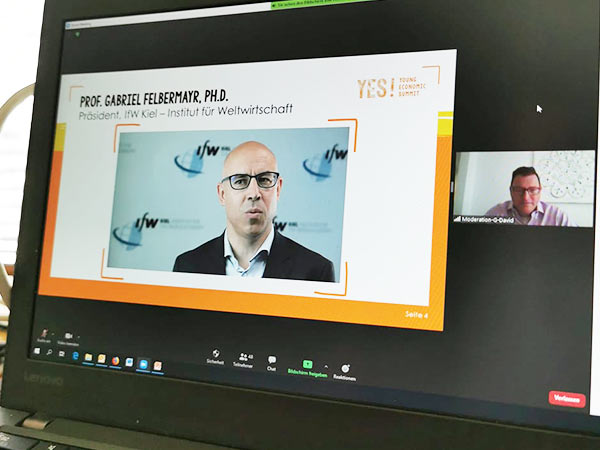 The IfW president sent a video to the school teams with words of warning for the world economy and encouragement for the youths. Photo: (c) YES! – Young Economic Summit

The IfW president sent a video to the school teams with words of warning for the world economy and encouragement for the youths. Photo: (c) YES! – Young Economic Summit

Although we did not have any live guests, the line-up of greetings to the students was impressive. Prof. Gabriel Felbermayr, Ph.D., President of the IfW Kiel Institute for the World Economy, emphasised in his video that especially in the current times when states are once again more often concerned about their advantage, it is enormously vital to focus on solutions. Karin Prien, Minister of Education of Schleswig-Holstein, clearly spoke out in favour of thinking these difficult weeks behind the young people as a new beginning that extends across all areas of society – and the input of the young people, in particular, is critical here. And Renate Treutel, the Mayor of Kiel, also took the opportunity to pay tribute to the enthusiasm and stamina of the teams with a video message.

But then things moved on quickly. Our two hosts Svenja Heber and David Patrician took over their mini regional finals orange and green again.

Our rules: 10 minutes of presentation, which the teams had made appealing by sharing their screens. This was followed by a 10-minute discussion – thoroughly critical, but always with appreciation for the work of the others. 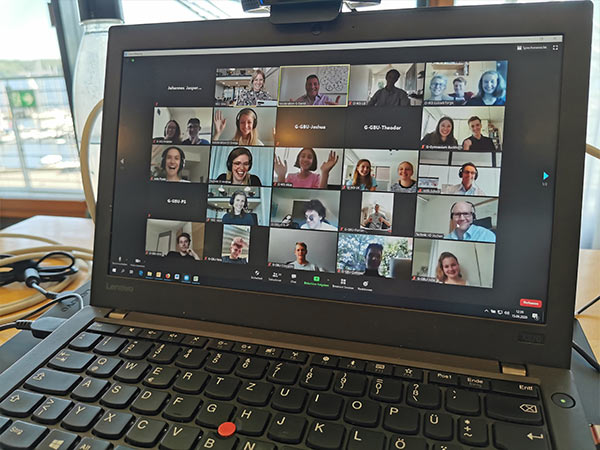 Even digitally you can deal with serious topics and have fun doing so . Photo: (c) YES! – Young Economic Summit

The Orange group contained two teams that had worked on the same topic: What will we do tomorrow? The future of work, provided by the ZBW. It showed once again how different approaches to solutions could be in the YES! The RBZ Wirtschaft . Kiel wanted to unearth hidden treasures with their idea “Enrichment through self-efficacy”. Their strategy: Employees have hidden talents or knowledge that a company should find out in workshops and use in daily work.

The Kurt-Körber-Gymnasium took a different approach. For them, the focus was on the unfair conditions for gig workers, i.e. people who take short-term jobs and are often poorly paid. With their Fair Gig platform, they wanted to create a way to evaluate companies and find jobs with fair conditions.

The third team from the Immanuel Kant School in Neumünster dealt with the topic of “Multilateralism in the crisis – How can we save international cooperation?” from the IfW. Their answer was information and transparency so that the population understands the importance of global alliances. Your App is at the centre of this.

Even digitally you can deal with serious topics and have fun doing so. Photo: (c) YES! – Young Economic Summit

The green group started with the presentation of the Gymnasium Buckhornfrom Hamburg. Their slogan “RETHINK YOUR FUTURE & “SWIPE” FOR A BETTER TOMORROW” describes the idea of a social network that aims to promote awareness of the CO2 consumption of each individual. Their topic was “How much CO2 is still allowed to enter the atmosphere, and how do we get it out again?” from the IfW.

The second team, Don Bosco Gymnasium from Essen, which was allowed to move to the north due to scheduling constraints, examined the situation in the care sector. Their subject was “Sick, old, left alone? How can the healthcare system cope with demographic change?” from RWI in Essen. They advocated the establishment of a profession that is located between nurses and doctors, to distribute medical tasks on more shoulders and also to financially upgrade the care sector.

The Globalization of Work: Meeting the Challenges of the 21st Century was the task of the IfW for the Sophie-Scholl-Gymnasium from Itzehoe. They took a closer look at the parcel market and developed a concept of deposit packaging instead of throw-away boxes.

After the presentations, each team was then allowed to discuss the other solution ideas in a digital room.

The two winners were the Gymnasium Buckhorn Hamburg and the Immanuel Kant School from Neumünster.

It was again a lot of fun with everyone, and of course, we congratulated the winning teams.

We’re going to blow the whistle for now before we continue in the west on 24 June – even if only digitally for all of us.