After the long first day, the teams returned on Friday morning to the Bucerius Law School to attend the final five presentations. The first team took us to Africa! BBS Burgdorf dealt with the topic “How to Strengthen the Economy in African Developing Countries”, which was proposed by Roland Dörn of the RWI Essen. The solution they came up was an app called “Ubatimu” – an app that should help African farmers, by simulation and gamification, to find the best possible crops and fertilisers for their land. Our experts, Martin Foth-Feldhusen of the GIZ and Holger Thiele of the University of Applied Science Kiel, were critical towards the approach for several reasons but also acknowledged the innovative format of the solution.

Second on stage was the Georg-Büchner-Gymnasium Berlin. By having an interactive presentation of their solution “RSMS – A Better indicator for Economic Forecasting”, the group kept the audience interested in their topic “Sense and Nonsense of Economic Forecasts:  Motivation and Methods for macroeconomic  Forecasts” by Ferdinand Fichtner of the DIW Berlin. Nora Hesse of the European Commission and Cyrus de la Rubia, chief economist of the HSH Nordbank, both thought that the idea is a good step in the right direction. In a lively discussion, the team responded to the many questions by the audience.

“Promoting financial inclusion: New policies and technological innovations through digital finance”, by Helke Seitz and Tim Kaiser of the DIW Berlin was the next topic on the table. The team of Berlin International School tackled this problem and came up with “Virgo – A Financial Ecosystem Reinventing Microfinance”. This system, based on an app, should enable people in developing countries to get access to finance more easily. Three experts joined the discussion, Cyrus de la Rubia, Nora Hesse and Thorsten Grenz of KIMBRIA. Quickly, an active debate evolved regarding the Virgo system, blockchain technology and microfinancing in general.

The last session before the lunch break circled around the topic “Promoting Digitisation in Business” by Jörg Ohnemus and Steffen Viete of ZEW Mannheim. The team Saarpfalz Gymnasium Homburg developed the concept of “M.I.T. – A Certificate for Digital Skills”, a system of training opportunities for employees. This session was moderated by Susan Djahangard, editor at “Die Zeit”, who welcomed Dagmar Balve-Hauff of the Federal Ministry of Economic Affairs and Energy and Dirk-Hinnerk Fischer of the Tallinn University of Technology. The experts agreed with the team that there is the need for a continuous qualification on the job, but they also saw an already established market in this field. 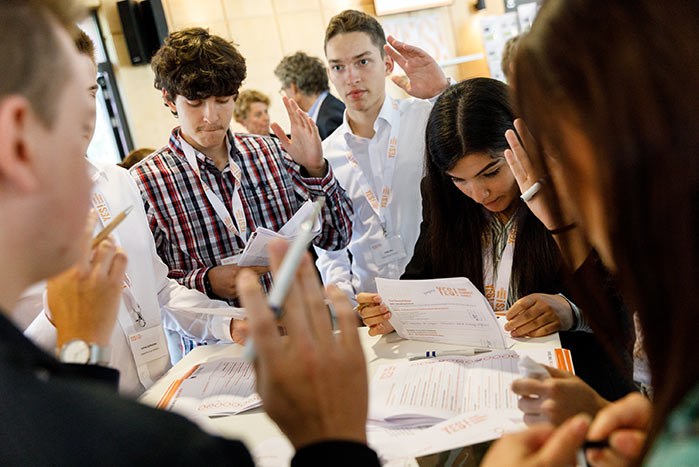 Ranking the solutions at the YES! is not easy, but takes a lot of discussions. Photo: (c) YES!

The final presentation of the YES! 2018 was about “The Facebook Business Model -You are the Product” by Cora-Wacker-Theodorakopolous and Timm Leinker of ZBW Leibniz Information Centre of Economics. The team of Gymnasium Wellingdorf asked themselves what kind of data has Facebook of each user. They used the options Facebook provides of downloading the user’s data and developed the concept of an app to visualise the data to understand more easily. The experts, Anne Riechert of Stiftung Datenschutz and Jil Sörensen of Hamburg Media School, pointed out how important it is to be sensible about the personal data and that such an app could undoubtedly improve the awareness.

Next, after the 1-minute-pitches of each team and a clear instruction on the voting procedures, the announcement of the winners was on the agenda.

Each team ranked the others and distributed 11 points to their favourite, 10 to the next and so on. And, as something new to the YES! in 2018, representatives of each team came to the stage to tell and explain, which team they ranked first. Excitingly, it showed that all the teams did a great job because a great variety of solutions was as the favourite solutions. 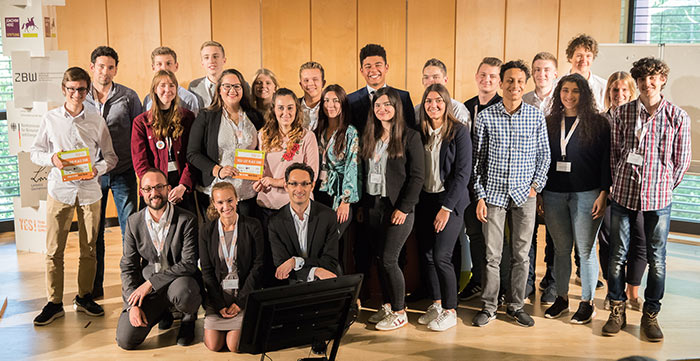 But not only the large numbers count. And so the winning teams finally were announced. Third place was the group Gesamtschule Waldbröl. The second was Cecilien-Gymnasium Düsseldorf, and the first place went to, drum roll please, Fritz-Erler-Schule Pforzheim II.

After two long days at the final, four regional finals and more than half a year of working with the teams, the organising team of the YES! certainly is happy for the winners, but we also feel with the teams that didn’t make it to the top. However, we know that they worked hard. And the past years have shown to us, that you don’t need to be in the top 3 to have a great idea that can change something.

We thank all of the teams, the teachers, the research institutions and their scientists for their support throughout the year. We are looking forward to coming back again next year, even larger with the fifth region South-East and a true nationwide competition.