In the third regional final, the teams from the Western Region gathered in our video conference – sometimes from home, sometimes from school – to determine which of them had developed the best solution idea. And the winners were the Konrad-Adenauer-Gymnasium from Langenfeld and the Regiomontanus Gymnasium from Hassfurt.

It would have been crowded on stage if all our guests had presented their greetings personally. But, in Corona style, we could only play videos. Prof. Dr Thomas Bauer, Vice President of the RWI – Leibniz Institute for Economic Research, would have liked to have been there as he had been in previous years and congratulated the YES! organisation for the Meritum Award of the Deutsche Aktieninstitut.

Yvonne Gebauer, Minister for Education in North Rhine-Westphalia, was also very impressed with how well the teams coped with the corona period and was looking forward to many great new ideas.

Third in the group of greeters was Thomas Kufen, Lord Mayor of Essen. He also praised how well the teams had been able to switch over to the digital version of the YES!

Afterwards, we went back to our now well-known mini regional finals Orange and Green, which were led by our two hosts Svenja Heber and David Patrician in their usual entertaining way.

But the same rules still applied: 10 minutes of presentation, which the teams had made appealing by sharing their screens. This was followed by a 10-minute discussion – perhaps not quite as intensive as in an analogue meeting, but still with critical questions and competent answers.

The Konrad-Adenauer-Gymnasium Langenfeld started in the green group. Their topic was “The Economy and I – Economic education as a prerequisite for our participation in a democratic society”, provided by the iwp Institute for Economic Policy from Cologne. For them, people needed to have access to more economic education, which is why they designed an app to make it easier for citizens.

A critical topic, which also affects them, was worked on by the group of the Konrad-Klepping-Berufskolleg from Dortmund. “Learning together – How the integration of refugee children in German classrooms can succeed” – that was the challenge RWI faced. The team developed a timetable that would combine the advantages of individual learning in regular classes with those of a community in an international group.

For the Gymnasium Petrinum from Brilon, the team also went into economic literacy, but with a focus on school, proposed by the ECONtribute cluster of excellence: “My house, my pension, my mobile phone – how do I make sensible financial decisions?” Their idea Educonomy involved using a digital budget to go through increasingly complex financial topics from grade 5 to grade 12.

The Orange group had with four teams. Two of them had worked on the same topic at RWI: “Climate change is costly, but so is mitigation: What policies are most cost-effective?”

“Work from home, save the climate” was the proposal of the first team from the Integrierte Gesamtschule Bonn Beuel. With a seal of approval for companies that are committed to offering home office, employees should directly recognise that a potential employer is open to such a work option. 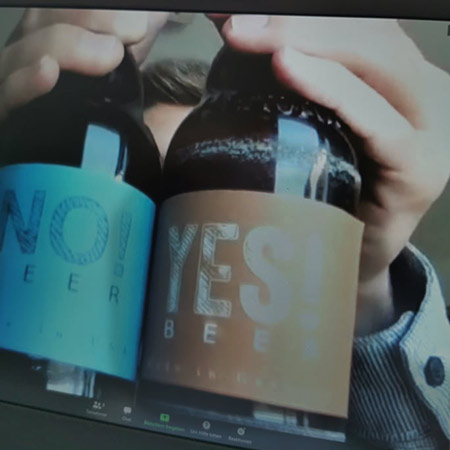 In their presentation, Rudolph-Brandes-Gymnasium mentioned a fictional brewery that produces YES! beer. And here it is. Photo: (c) YES! – Young Economic Summit

The idea of the Rudolph-Brandes-Gymnasium Bad Salzuflen was quite different. With their approach “Phase X takes an economical approach to tackle climate change and enhances the EU Emission Trading System”, they wanted to improve Europe-wide certificate trading for emissions.

For the Regiomontanus Gymnasium from Hassfurt, the topic was on donations and taxes: “Donations and social policy: Do we need taxes or are voluntary donations the better way to finance public goods”, a topic provided by the Düsseldorf Institute for Competition Economics (DICE). Their answer was a – restricted – co-determination for everyone, what the government should do with their taxes.

The fourth team from Engelsburg Gymnasium Kassel presented their idea Greenpare – Sustainable and responsible banking. Their suggestions are unambiguous guidelines on how banks should behave sustainably, ethically and environmentally consciously in their investments. The cluster of excellence ECONtribute provided their topic: “Can the financial sector help to solve global problems?”

After the one-minute pitches, the teams retreated to discuss and cast their vote.

The winner in the green group was Konrad-Adenauer-Gymnasium Langenfeld. In orange the Regiomontanus Gymnasium prevailed. Congratulations! 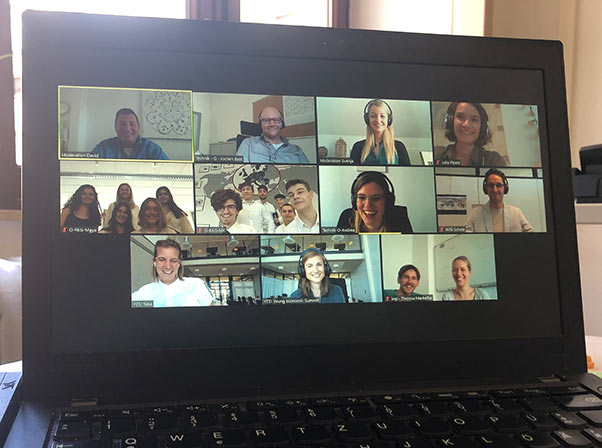 We have now finished three out of five regional finals. It’s still exciting, even digitally, and the ideas of the teams are on the same level as we’ve seen in previous years. Kudos to all our young participants out there!

On July 1, we will move on to the south-west region. The region has been part of the competition since 2017 and has provided the winner of the national final three times in a row. So we expect great solutions!

See you soon,
your YES! team