In our second home, the south-west region, which has been part of the YES! for four years now, we encountered a discussion-packed round. The teams voted for the Albertus-Magnus-Gymnasium Stuttgart and the European School RheinMain from Bad Vilbel as representatives of the area at the National Final.

We were delighted to have the President of the ZEW – Leibniz Centre for European Economic Research, Prof. Achim Wambach, Ph.D., as a guest again. He joined us live and emphasised how great he thought it was that so many teams, so many teachers and researchers have continued despite the circumstances.

Volker Schebesta, State Secretary in the Ministry of Culture, Youth and Sports in Baden-Württemberg, had a similar opinion. In his video statement, he said to deliver all the tasks in digital form was a great achievement of the young people for him.

We continued with our presenters Svenja Heber and David Patrician and our mini regional finals orange and green.

In the green group, the Albertus-Magnus-Gymnasium from Stuttgart started.  Their topic was “Efficiently organising the allocation of day-care places”, submitted by ZEW. In many cities, as in their example Stuttgart, the allocation of day-care places is very complicated for parents, day-care centres and the city administration. With their approach to using an algorithm-based ranking system, the process should not only be standardised and simplified, but the actual number of unfilled day-care places should decline.

“My house, my savings account, my pension”: What can you do if interest rates stay low? – this was the question posed by ZEW researchers to the Richard Müller School in Fulda. The team took up the urgent issue of sustainability and linked it to retirement provision. They called their idea “Financetree”. One euro out of eleven euros that a young person pays into ethical and sustainable funds per month as a safeguard in old age flows into concrete projects for environmental protection.

The next topic was also put forward by ZEW: “Facts instead of fake news – Why science communication in the digital space is becoming increasingly important”. The team from the Goethe-Gymnasium in Freiburg called their approach “Wikicheck”. With their platform, which provides volunteers and researchers together as reviewers, they wanted to uncover fake news quickly and reliably. 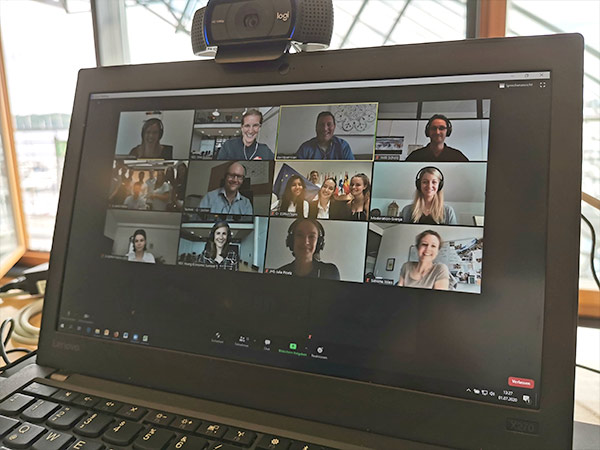 In the orange group, the European School RheinMain from Bad Vilbel was first on the list. Their topic: “How can we measure the value of marketing? What is a brand worth?”, provided by the Leibniz Institute for Financial Market Research SAFE. With an app and a sophisticated system, they wanted to allow smaller companies to sound out and evaluate their marketing options more precisely to be more visible on the market.

“Access the German labour market: How can we strengthen the integration of refugees”, suggested by the ZEW. Lise-Meitner-Gymnasium from Maxdorf tried to answer this question. Their target group were young women who came to Germany but were not actively looking for work because they lack the information to do so. A volunteer “companion” should approach them, helping them to get to know the options they have on the job market. This is the core of their “Shajara System”.

The team from the Saarpfalz Gymnasium in Homburg also devoted itself to the same topic. Their approach was to bring Germans and migrants together through language courses, improved information and joint sports activities.

“SuSTravel – We have a dream, travel green” – this was the motto of the idea of the BSZ Leonberg. The young people linked the concept of sustainability with school trips and developed an idea of how school groups can make their trips more environmentally friendly. Their challenge from the ZEW was “Founders’ Day, now! Through innovative start-ups to the “Green Economy”.

The winner in the green group was the Albertus-Magnus-Gymnasium from Stuttgart. In orange, the European School RheinMain from Bad Vilbel came out on top. Congratulations to both teams and we look forward to seeing you at the National Final!

Now we have a little breather until 14 July, until the last round this year in the south-east region.

The winning teams South-East and South-West were Annette-Kolb-Gymnasium from Traunstein, the Albertus-Magnus-Gymnasium from Stuttgart and the Raiffeisen-Campus from Dernbach.

The teams from BBS Burgdorf and Max-Planck-Gymnasium Gelsenkirchen won the regional final West 2021.

We congratulate the Deutsche Berufsschule Hong Kong and the International School of Geneva as winning teams.

Award ceremony for “Raising the Profile of Education and Science Diplomacy”

Our project "YES! Bridge" project was awarded the prize for “Raising the Profile of Education and Science Diplomacy” (BWD) by the Federal Ministry of Education and Research. Now the prize was officially awarded and we were able to find out what convinced the jury so much about our project.

The award ceremony for the winning teams of 2020.