The digital regional final East has been successfully completed

The digital regional final East has been successfully completed

That was something special! After five years in which our regional finals were always a highlight at the YES!, where all the teams of a region met and this special YES! spirit floated through the halls – everything was to be different thanks to Corona. But digital can indeed have its particular charm – and two strong winning teams Martin-Andersen-Nexö Gymnasium from Dresden and Carl-Bechstein-Gymnasium from Brandenburg.

These weeks are particularly busy for us from the YES! team every year. The planning and logistics of five events in six weeks are quite an effort. This year we were unfortunately not able to travel, but we couldn’t do without planning. How can a digital regional final with 6, 7 or 8 remaining teams per region be sensibly arranged? 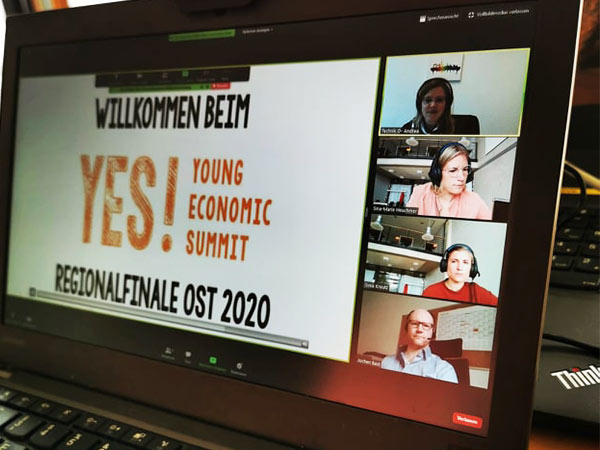 A last test from the team before the event starts. Photo: (c) YES! – Young Economic Summit

It works, and it went well the first time. We were happy about 70 participants. The teams were connected; many researchers stopped by,  and Prof. Dr. h.c. Jutta Allmendinger, PhD was also present. As president of the WZB she would have been our host in Berlin for this event.  But she took the time to praise the students and their work in the past months.

Our two presenters Svenja Heber and David Patrician led through the event but had to part soon. In order not to have a too long video conference, we had decided to have two parallel mini regional finals. This is the result of the drawing:

But the same rules still applied as in every other year: 10 minutes of presentation, which the teams had made appealing by sharing their screens. This was followed by a 10-minute discussion – perhaps not quite as intensive in the beginning as in an analogue meeting, but still with critical questions and competent answers.

In Group Orange, two teams had picked the topic ” How can I imagine my mobility in the city and in rural areas without my own car?”, proposed by the WZB. The Carl-Bechstein-Gymnasium had developed the idea of building a bicycle highway to enable environmentally friendly, fast and healthy travel to the countryside. A different approach was taken by the Catholic School Salvator, which wanted to establish a gondola system in the city instead of cars.

The Richard-Hallmann-Schule from Trappenkamp developed an online platform to build a bridge from scientists to young people. Their topic was the WZB topic “How can we preserve the freedom of science?

The fourth team, Freie Gymnasium Borsdorf, also had a platform in mind, “Freie Gründer Borsdorfs”. Their topic was Digital Business Models: How can the German industry transform for the future? by the Center for Economic Policy Studies (CWS). Their idea was to bring future employees, i.e. today’s students, closer to digitization to enable companies to find the people they need for a digital change.

In parallel, three teams presented and discussed green in the group. The Semper Gymnasium Dresden dealt with Autocracy 2.0 – dictatorships and the Internet from the WZB and designed a platform that should enable users to effectively deal with information and tools to censor and internet restrictions.

How to sensitize pupils for the topic Big Data was the solution approach of the team of the Martineum Gymnasium from Halberstadt. Their problem, provided by CWS, was Big Data-based social credit systems – opportunities, challenges and solutions.

The third team, Martin-Andersen-Nexö Gymnasium from Dresden, had a very local topic to deal with:  Is there a life after coal? Economic development in East German mining regions. They aimed to strengthen the soft factors that keep inhabitants in their area. All the money that the government wants to spend on structural change should be divided up sensibly by co-determination councils in the region. 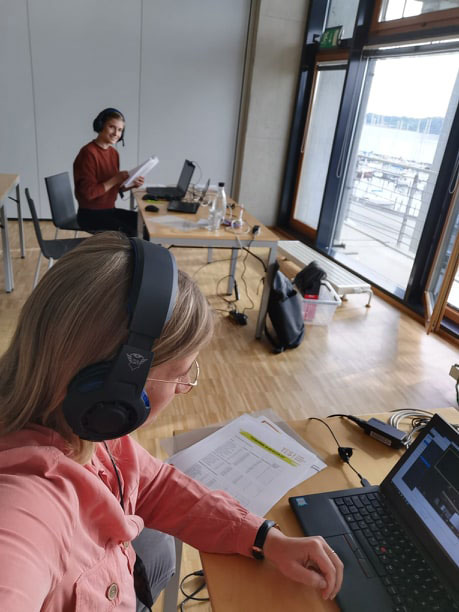 Everything ready, well prepared, we had to keep track of who was in which mini regional final. Photo: (c) YES! – Young Economic Summit

Each team was then allowed to go into a digital room after the presentations to discuss the other solution ideas.

And the winners of the mini regional finals were then allowed to enter the National Finals. The Carl-Bechstein-Gymnasium came out on top in the orange group. The winning team in the green group was Martin-Andersen-Nexö Gymnasium.

Congratulations to both teams. Many thanks to all teams who, despite Corona and homeschooling, held out and delivered outstanding presentations. These were ideas and concepts that do not have to hide from those of the past years. And of course, also a big thank you to the researchers who went through this extraordinary time together with us.

We are all happy to have mastered the first regional final so successfully. But that was only the beginning.

On June 15th, we will continue with the Northern region. We are looking forward to seeing you.

The award ceremony for the winning teams of 2020.