It’s time again for our regional finals. On the one hand, it was a shame that we had to organise them digitally again this year. On the other hand, however, the students and we have become so digitally competent that we were able to experience great presentations and discussions at the first event in 2021 and send our YES! spirit through the internet. 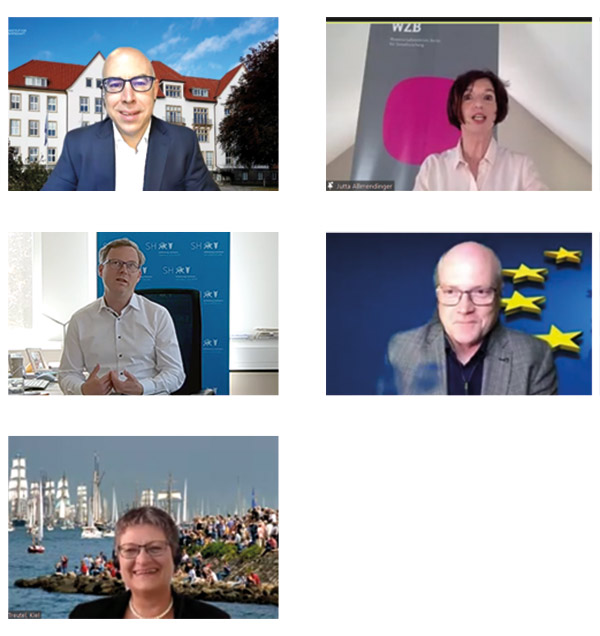 And it was also lovely to have our moderation team Svenja Heber and David Patrician back on board. They began by welcoming Prof. Dr. h.c. Jutta Allmendinger, PhD, President of the Social Science Research Center Berlin (WZB) and Prof. Gabriel Felbermayr, PhD, President of the Kiel Institute for the World Economy (IfW Kiel). In their welcoming speeches, the two spoke about the great importance of the young people’s topics and how important it is to build bridges between research and society on the one hand and tear down walls and overcome boundaries to arrive at solutions together.

For the first time, we held two regional finals simultaneously, which was simply due to the pandemic-related organisation of our competition. And so the 14 teams were divided into the North and East regions.

In the North, Svenja Heber welcomed the first team, the Helene Lange Gymnasium in Rendsburg. They called their app “good food good mood”, with which they wanted to give people the opportunity to improve their eating habits. Their topic was “Healthy eating – healthy planet” by Christine Merk from the Kiel Institute for the World Economy (IfW Kiel).

Food was also the topic of the Friedrich-Schiller-Gymnasium Preetz. Their topic was set by Stefan Pahl and Anette Ruml from the GIGA Leibniz Institute of Global and Area Studies: “How can global food become more sustainable?” The team developed the idea of a “Sustainability Score” – a uniform evaluation of food based on animal welfare, social aspects and sustainability.

Things got political with the team of the Stiftung Louisenlund with their “Youth Quota”. Their topic was “Population ageing and democratic decision-making: Après nous le déluge?” by Steffen Müller from the University of Hamburg. In the team’s view, when political decisions are made, young people should also be represented in political bodies, as their generation will live with these decisions for a long time.

Young people, especially students, were also the focus of the Immanuel Kant School Neumünster. “The question of housing shortages, gentrification and rent madness: How can affordable housing be created in cities?” was posed by Insa Weilage from the Center for Economic Policy Studies (CWS) at Leibniz University Hannover. In response, the team presented “Container4u” – a further developed type of student housing, which enables students to live cheaply and sustainably in a central location in the form of a container settlement.

The Max Planck School Kiel also dealt with the topic of healthy eating – healthy planet. With their concept “Foodture”, they wanted to educate students about healthy and sustainable food.

The Alexander-von-Humboldt-Schule Neumünster provided the second solution on the topic of “How can global food become more sustainable?” They too saw young people as a target group that can lead to more sustainable food through broad education around nutrition.

In a brief visit to the Northern Region, we welcomed Dr Thilo Rohlfs, State Secretary in the Ministry of Economics, Transport, Labour, Technology and Tourism of the State of Schleswig-Holstein. He spoke about the commitment of the individual school teams and emphasised the extraordinary interest in actively supporting the youth in shaping the future. Here, the State Secretary mentioned that he would be happy to get in touch with the winning teams for a further exchange to establish connections and other discussions.

To get an impression of the event and the approaches to solutions, Mr. Rohlfs stayed for the rest of the session – which thematically and professionally fit into his field of responsibility, as the Ministry is also the contact for vocational schools.

The last team of the afternoon in the North was the RBZ Wirtschaft . Kiel with “Food waste – not a good taste”. They developed an idea on the topic „Blue growth in the tourism sector? Making Maritime Tourism Sustainable!“ by Christine Bertram from the Investitionsbank Schleswig-Holstein (IB.SH). Their focus was on reducing food waste, which occurs far too often at buffets on ships. With their concept of asking for meal requirements when booking cruises, the team expects not only less waste, but also cost savings for the shipping companies.

The first team in the Eastern Regional Final, with David Patrician, came from the school that had developed the winning solution last year, Martin-Andersen-Nexö Gymnasium Dresden. They dealt with the topic “How should schools contribute to solving the mental health crisis?” by Dustin Eirdosh and Susan Hanisch from the Max Planck Institute for Evolutionary Anthropology. Their approach was a concept and a collection of materials for lessons to better deal with the mental health problems of pupils with the help of previous surveys.

The Musikgymnasium Käthe-Kollwitz from Rostock and the IRS Leibniz Institute for Spatial Social Research from Erkner participated for the first time. Stefanie Brünenberg and Peter Ulrich had prposed the topic “Sustainable Garden Cities in Sight. From Hellerau, Eisenhüttenstadt to new concepts of future-oriented residential working quarters.” The school team saw this as an opportunity to address problems such as light pollution and lack of sustainability. Their concept “LUNE – Light(‘)s everything” consisted of three pillars – more animal-friendly light, energy generation through modern walkways as well as fluorescent plants – and aims to make garden areas fit for the future.

“Your Mental Health Matters” was the second solution on the topic of “How should schools contribute to solving the mental health crisis?” Team Neue Schule Wolfsburg suggested that teachers should receive regular and detailed training to react earlier and better to pupils’ mental health problems – or even to avoid them altogether.

“Applause alone is not enough – How can nursing professions become more attractive?” by Michaela Fuchs and Julia Lang from the Institute for Employment Research (IAB) was the topic of the team Landschulheim Grovesmühle Veckenstedt. They recognised that one of the biggest problems of the shortage of nursing staff is that young people, in particular, are not sufficiently informed about nursing professions. Therefore, they developed a concept for project days at school. They also contacted local nursing institutions and the Federal Employment Agency for support for their project.

Twice, the topic was then “Pub closures – How can we save the village pub?” by Joachim Ragnitz, Felix Rösel and Marcel Thum from the ifo Institute (Dresden branch). The Innerstädtisches Gymnasium in Rostock took the approach of making the still existing pubs more attractive through new concepts such as events on certain days of the week, thus ensuring their survival.

The Luther Melanchthon Gymnasium in Wittenberg, on the other hand, was convinced that a new form was needed and that the pub itself might not have to be saved. So they developed the idea of a multi-generation house as a place where everyone is welcome.

The last presentation of the day was given by the Bismarck School Elmshorn on the topic of “New debt caused by the corona pandemic – How can we prevent the financial crisis and ensure more equity?” by Axel Ebers from the Center for Economic Policy Studies (CWS) at the Leibniz University in Hanover. Their focus for solving this problem was educating the financial situation, which they wanted to do, among other things, with videos on TikTok.

The winning teams of the North and East regions at the end of the event with the YES! team

After a long day and very intensive discussions, the teams then voted at the end on which teams should represent their region at the final:

The teams from Immanuel Kant Schule Neumünster and RBZ Wirtschaft . Kiel were chosen in the north.

The finalists were announced by Mayor Renate Treutel of Kiel and Gerry Woop, State Secretary for Culture and Europe from Berlin.

We from the YES! team, of course, congratulate all the finalists and look forward to seeing you in the final. But it was also a great experience with great ideas for all the other teams.

Many thanks to all the school teams, teachers and researchers who gave us two grand regional finals under these difficult circumstances.