June 25, 2021. Our regional final West stretched over two days with 11 teams – again, a first for a regional final at YES!. In the end, the teams from BBS Burgdorf and Max-Planck-Gymnasium prevailed.

Our moderator team Franziska Kohn and David Patrician had the pleasure of welcoming two guests at the beginning of the event. Prof. Dr. Thomas K. Bauer, Vice President of the RWI Leibniz Institute for Economic Research, spoke about how a competition like the YES! makes a significant contribution to young people, particularly understanding that economics and economic research are more than just profit-oriented companies. Instead, he emphasised the need to focus on democratic freedoms, especially in a time of the pandemic. 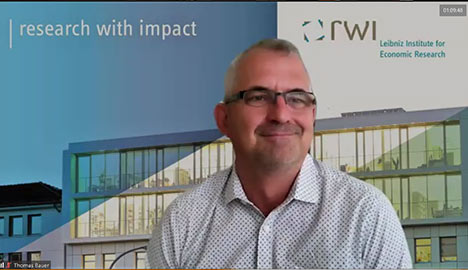 RWI Vice President Thomas K. Bauer was not only looking forward to this event, but also to next year to meet again in person.

Julia Jacob, the first mayor of the city of Essen, also joined in and talked about how important the exchange on these crucial issues is at YES! She is convinced that action is an essential part of a democracy – as it is lived in YES! 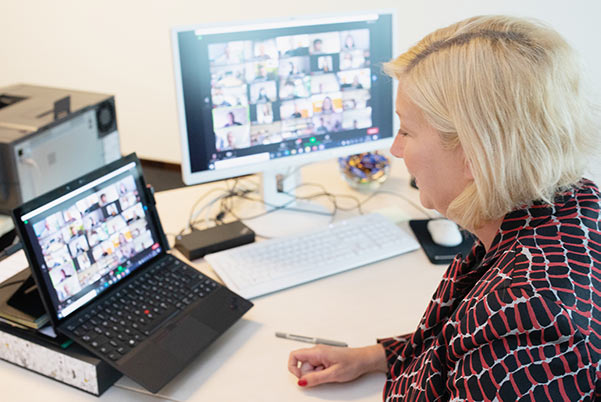 The first mayer of the city of Essen, Julia Jacob, encouraged the teams to keep going and get engaged in important issues. Photo: Moritz Leick, Stadt Essen.

The first team to start was the Max-Planck-Gymnasium from Gelsenkirchen. Their idea was “Make Your Job KINTeresting / An app providing jobs while acknowledging the difficulties of having a family.” Behind the app is a job search platform that deliberately focuses on the family-friendly aspects of companies. Their topic was „Career Planning and the Birth Gap: How to better balance studies, career and family? by Daniel Kamhöfer, Düsseldorf Institute for Competition Economics (DICE), and Matthias Westphal, RWI – Leibniz Institute for Economic Research.

The second team dealt with the topic „The Dark Secret of Chocolate – How can we support sustainable cocoa farming?“ by Gunther Bensch and Kathrin Kaestner from RWI – Leibniz Institute for Economic Research. The group from the Burg-Gymnasium Bad Bentheim planned to introduce a genuinely transparent cocoa score for cocoa products that would make it easier for consumers to question and track ecological, economic and social values.

The Freie Waldorfschule from Sankt Augustin wanted to integrate topics such as discrimination and racism into lessons and teach them across subjects to promote early awareness – prevention through education. Their challenge „Racism and Discrimination: Approaches to Solving a Societal Challenge“ was proposed by Anna Bindler from the Cluster of Excellence ECONtribute.

The Economics of Fake News: Free Opinion, False Belief and Censorship? by Gerhard Riener from the Düsseldorf Institute for Competition Economics (DICE) was the fourth topic of the day. The Städtische Gesamtschule Iserlohn also saw a concept for raising awareness of Fake News as a solution to this problem and called it “(YFELI) Youth for education a learning initiative”, and it should be installed in schools.

The Ratsgymnasium from Peine wanted to provide online training to facilitate care work with “Helping Hands – We Care”. Their task was to answer the question „Gender structures in times of crisis – How can equality be advanced even in exceptional situations?“ The topic was posed by Rebecca Leber and Anna Werbeck from RWI – Leibniz Institute for Economic Research.

Team 2 of the Freiherr-vom-Stein-Gymnasium from Leverkusen, a school project for more young carers and solidarity in society, presented the final solution of the first day. Their topic was „Nursing 2030: – How can the lack of young people in the nursing professions be countered?“ by Sandra Leumann from the WZB Social Science Research Center Berlin.

The second day started with the idea “Stop the heat, eat less meat” by the Gymnasium Köln-Pesch. With realistic pictures (shock images) on the packaging of animal products, they wanted to encourage more sustainable and animal-friendly consumption. Rebekka Rehm and Christoph Oslislo from the iwp Institute for Economic Policy at the University of Cologne presented the topic: „Nudges to a Green Future: How “Nudges” Can Move Us Towards Sustainable Behaviour.“

Fake News was the topic for BBS Burgdorf. The team developed “Conspirex”, a hardware solution, for networks at home. It can be used to block servers that are used to spread fake news. They also dealt with the topic „The Economics of Fake News: Free Opinion, False Belief and Censorship?“

The Konrad Klepping Berufskolleg from Dortmund also dealt with the topic of nudges from the iwp, particularly with the consumption of paper towels. “#savepaper #savetrees #savetheearth – it’s up to you!” was the concept, with an informative sticker designed to avoid wasting paper towels by arousing emotions.

“Greentour” – this was to be the name of a shop offering returns before they go back to the supplier to save emissions. The team from the Gymnasium an der Gartenstraße in Mönchengladbach developed this approach on the topic „Shopping for the Future – how can our consumer behaviour become more sustainable?“ by Pamela Del Rosario and Anna Luthin from RWTH Aachen University.

The last team in the regional finals was Team 1 from Freiherr-vom-Stein-Gymnasium in Leverkusen. Their topic: “Be part of it! But how? How can social participation succeed? by Claudia Globisch, Markus Gottwald and Katja Hartosch from the Institute for Employment Research (IAB). They dealt with ideas on how young people could be taught to handle money better and that debt counsellors could support people affected by debt more intensively. 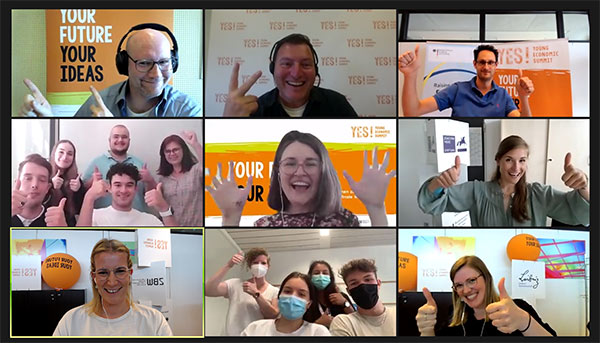 After two days, it was time for the teams to vote on the solution ideas they had presented. The winning teams came from the BBS Burgdorf and the Max-Planck-Gymnasium.

For the YES! team, there is one last regional final left this year with many teams from the south-west and the south-east. We are convinced that we will again see excellent presentations and discussions there.

Congratulations to the two winning teams.