The YES! – Young Economic Summit is a school competition based in Germany.

In 2022, several teams from the UK and the USA will also have the chance to join the competition.

If you are interested in taking part or if you would like to have more information please get in touch with us via email, yes@zbw.eu.

In November, we will be able to share details on how to register as an international team.

We shot a video following a team in 2019 all the way from the first meeting to the award ceremony. It is in German, but English captions are available.

In keeping with the motto “Everything remains different”, the year 2021 culminated in a digital final that in many respects could not be compared to the one in 2020. And the list of winning teams was also peppered with new names. First place went to the Max-Planck-Gymnasium from Gelsenkirchen followed by the Annette-Kolb-Gymnasium from Traunstein. The Albert-Einstein-Gymnasium from Frankenthal came in third. Because the jury found them so remarkably good, two prize winners were awarded the “Best Scientific Analysis” award: Grovesmühle Country School and the German Vocational School Hong Kong.

Internationally, seven teams were represented. The best solution in this group was presented by South Forsyth High School from Cummings, Georgia, USA.

2021 was a big surprise bag for us at YES! In the midst of a pandemic. Would teachers trust themselves with the effort of a school competition like the YES! ? After all, a good third had dropped out of YES! during the first Corona wave.  Then, when more than 60 teams were registered at the closing date in December, we knew we had a complete programme waiting for us.

Despite the second and third waves, almost all teams remained loyal to us. They organised themselves online in the second school lockdown and prepared for their regional finals, sometimes without even meeting once as a group.

In our four regional finals, 12 teams prevailed. At the finals, they were joined by two teams from Great Britain and three from the USA. This was already a tiny foretaste of YES! Bridge, our competition that we want to hold in 2022 with five teams on the British Isles.

Live from the Studio

To give this year’s final a special touch, we set up a small TV studio from which our moderation team Svenja Heber and David Patrician welcomed the teams and speakers. 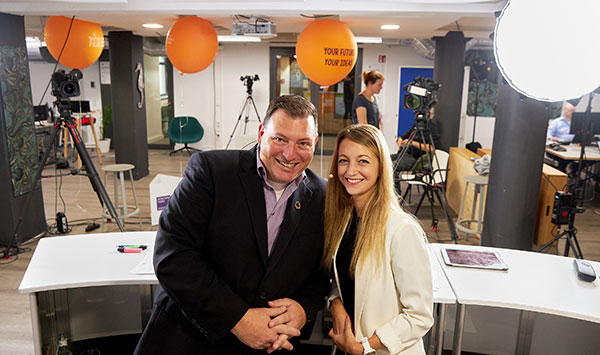 Our moderation team Svenja Heber and David Patrician and a look behind the scenes. Photo: YES!

With great effort – a graphic recorder, a complete production crew and their dog Sally – we then integrated 17 teams with 38 speakers into the programme over three days. Ideas for solutions ranged from a new kind of transport network in urban peripheries to a hybrid game on finance and ideas around the fair distribution of school meals to children who need it for financial reasons.

Our speakers came from 10 countries and various federal ministries and agencies, the European Commission, the OECD, NGOs, the private sector and universities. 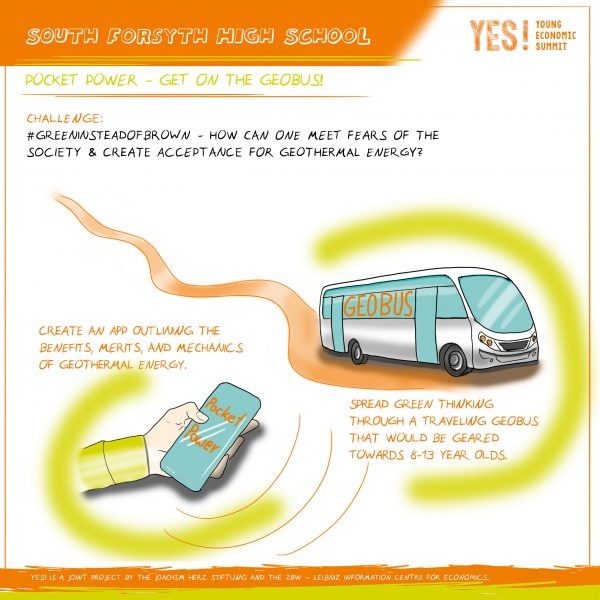 For each team, our graphic recorder Nicolas designed an individual graphic for the solution idea. Click on the image to see a larger version.

First place among the international teams went to the team from South Forsyth High School in Cummings, Georgia, USA. Their challenge was “#greeninsteadofbrown – How can one meet the fears of society & create acceptance for geothermal energy?” and was set by Tabea Schröder and Markus Waldvogel from RWTH Aachen University. As a basis, the team first conducted a survey in the school environment and used it to develop an information campaign with which they wanted to approach young people. Their “GeoBus” was to travel to schools and draw attention to the opportunities offered by geothermal energy at an early age. Then, older generations should have the chance to find out about geothermal energy and its possibilities with an app.

Education also for nursing professions and a tax lottery 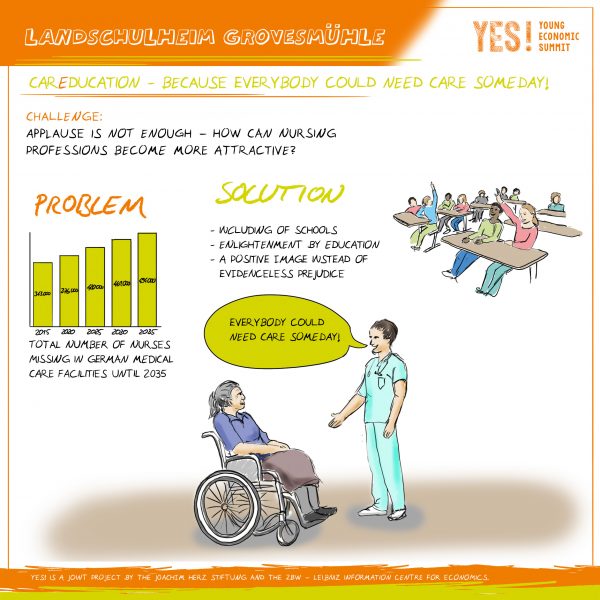 The winning team of the “Best Scientific Analysis” award of the Landschulheim Grovesmühle  was awarded another idea about educating the younger generation. With “CarEducation” – spoken Care Education – they developed documents for project days at schools with which teachers can inform their pupils about work in the care professions. The group’s topic was provided by Michaela Fuchs and Julia Lang from the IAB Institute for Employment Research. The team was particularly commended for their detailed examination of labour market data and their corresponding conclusions. 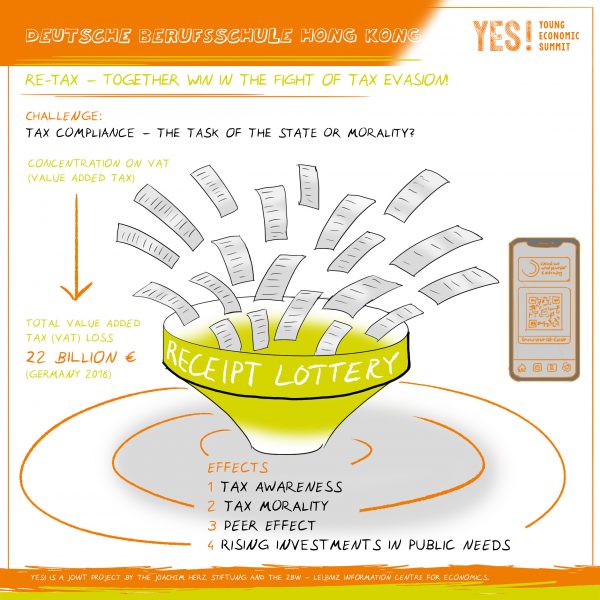 The second school team to be honoured for their scientific analysis was the German Vocational School Hong Kong. Their topic by Dominika Langenmayr and Philipp Krug from the Catholic University of Eichstätt-Ingolstadt was: “Tax compliance – the task of the state or morality?” They analysed the loss of tax revenue caused by smaller businesses such as bakeries not accounting for every sale through the till. They want to minimise these tax losses with a lottery to get big winnings via a code on the till receipt.

Integration of refugees remains an issue 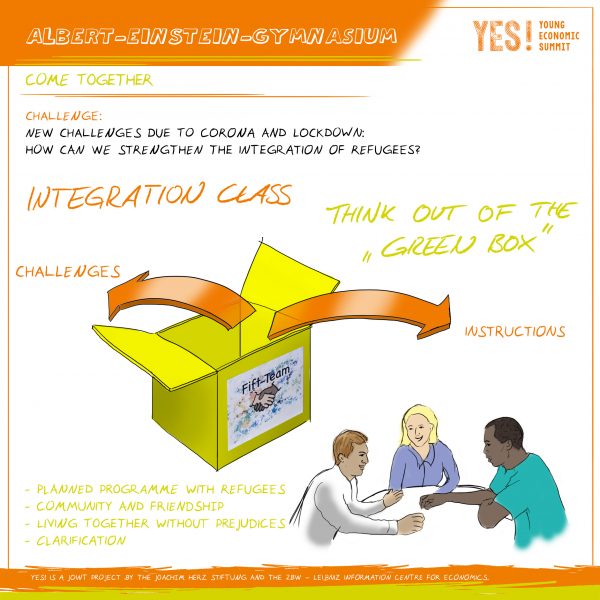 Even if the images of the large masses of refugees on their way to Germany are a few years ago, the integration of these people remains an issue – and not only at the YES! “New challenges due to Corona and lockdown: How can we strengthen the integration of refugees?” asked Paul Berbeé and Katia Gallegos Torres from ZEW – Leibniz Centre for European Economic Research. The group from the Albert-Einstein-Gymnasium in Frankenthal then developed a box with instructions for activities under the slogan “Come Together”. It is intended to serve as a starting point for local young people and refugees to meet and spend their free time together to promote integration. This approach was rewarded with third place. 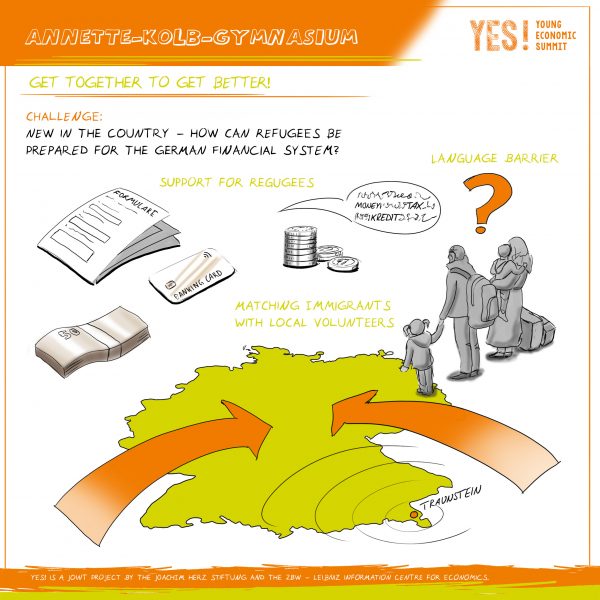 The runner-up was the Annette-Kolb-Gymnasium. Their idea was called “Get ToGether to get better”. Volunteers and refugees are to register via their platform and are matched to each other via an algorithm. The volunteers support the refugees in financial issues, such as contracts, a community is to be formed through different activities. 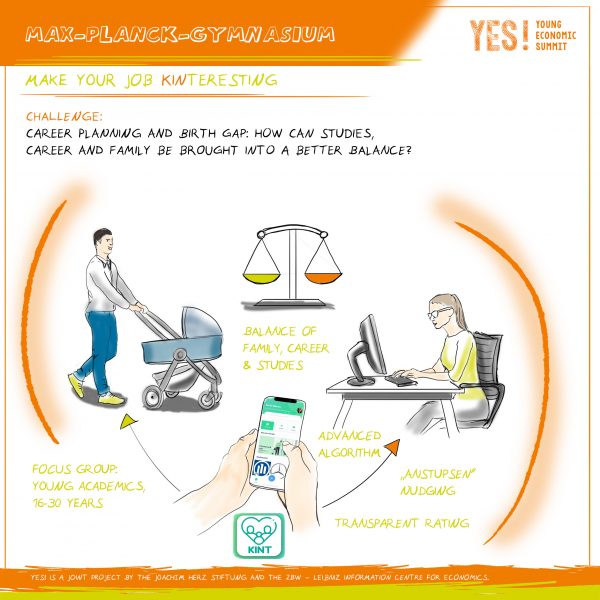 A niche in job search engines and business networks was seen by the winning team from Max-Planck-Gymnasium in Gelsenkirchen: “Make Your Job KINTeresting / An app providing jobs while acknowledging the difficulties of having a family.” They addressed the topic “Career planning and birth gap: How can studies, career and family be brought into a better balance?” by Daniel Kamhöfer (Düsseldorf Institute for Competitive Economics (DICE)) and Matthias Westphal (RWI – Leibniz Institute for Economic Research). From their point of view, family-friendliness came up short in the existing range of platforms. That’s why they developed the idea of an app called “Kint”, which job seekers can use to filter specifically for companies and their job offers, which are evaluated according to various, family-friendly criteria.

All winning teams of the YES! Germany, we will see again towards the end of the year at the digital award ceremony by the Federal Ministry for Economic Affairs and Energy.

2021 – a broad spectrum with a common denominator

Over 80 researchers worked with 72 national and international school teams this year. In addition, 46 topic proposals were submitted by our partner institutes, whose number increased to 25 this year. Issues around care, integration, tax policy, mobility, environmental problems, digitalisation and the labour market, to name but a few, invited the teams to develop their own ideas.

With all the different approaches, there have always been focal points in the YES! solution approaches over all the years. Sometimes it was apps; sometimes, it was seals of approval. In 2021, school-based education came up again and again. Many teams believed that the solution to their problem lay in educating their generation – as was the case with the team from Grovesmühle Country School or also with South Forsyth High School as the prize winner. In any case, we are already excited to see where the journey will take us next year.

2022 – International and hopefully in person again

Next year, we hope, it will be different again, back to face-to-face meetings at our final decisions. But, as much as we have pushed the digital version of YES!, the direct contact with the young people, the researchers and the experts at our events still remain something special for us.

Internationally, thanks to funding from the Federal Ministry of Education and Research for our YES! Bridge project, we will be holding an event outside Germany for the first time. Five teams from the UK will be coached by researchers and prepared for their own finals as part of Science Diplomacy. The two winning teams will then be allowed to go to the grand final in September, where three teams from the USA will again be allowed to take part.

2021 was another season full of new challenges. But what always remains is our thanks to the school teams, the teachers, the researchers, the experts – to everyone who supports us so much with their encouragement.

For us as a team, the preparations for the new year are already beginning. So let’s see what will be different.