Everybody can be a scientist 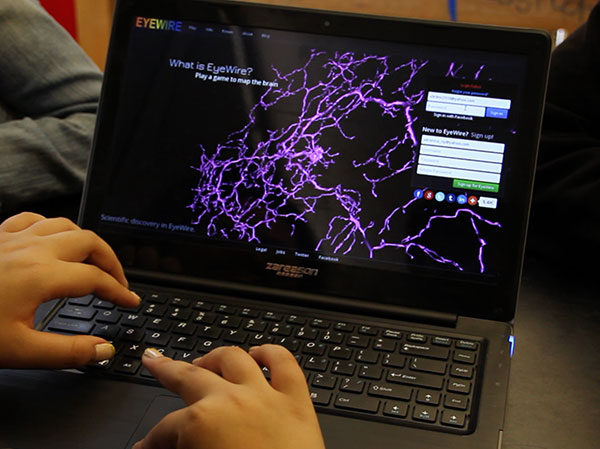 Schlossplatz 1 in Berlin: Once Erich Honecker and his fellow leaders of the German Democratic Republic tried to manage a centrally administered economy from this building. Nowadays the (future) leaders of the market economy take their academic training here at the European School of Management and Technology (ESMT). ESMT offers different Masters in Management as well as Executive Development Programs. On March 12 the ESMT provided the framework for a meeting of Henry Sauermann, who is associate professor of strategy at ESMT, and a group of students of Alfred Nobel Gesamtschule Potsdam.

Sauermann introduced the students into one of the fields of his academic interest that they are going to work on for the next months as well: Citizen Science. Going back to a bird counting project in 1900 the approach of gaining scientific knowledge by involving non-scientists in the process of research gained growing attention in the last decades. Especially the appearance of the New Media as a basis for the power of an interconnected crowd boosted the perceived potentials of the idea. Nowadays non-scientists can be part of every phase of the research process – from defining relevant research questions through data collection to analysis and interpretation.

According to Sauermann Citizen Science could be capable of solving major societal problems in various fields. In fact even the YES! project is a Citizen Science project as students, who are no scientists at first glance, develop approaches to master contemporary challenges. But besides all hopes, there are deficits as well. First of all questions of data quality, awareness, participation and acceptance within the scientific community impede the success of Citizen Science. In this light, the task for the project team of Alfred Nobel Gesamtschule Potsdam will be to take a step towards a framework that helps Citizen Science to reveal a bigger part of its potential.

In the meantime: Everybody can be a scientist already. Take a look at websites like buergerschaffenwissen.de or citizen-science-germany.de and start right now.