It wasn’t sunny outside, but inside, on stage and in the audience, all was bright and ready for the first day of the 2019 National Final. 7 teams presented their ideas, discussed them with experts and did a great job promoting their solutions.

Our two moderators, Svenja Heber and David Patrician, welcomed the students, experts, guests, and many researchers, who also joined the summit to learn about the other ideas and support their teams.

After a brief introduction by Meinhard Weizmann, the Managing Director of the Bucerius Law School, where the final was hosted, Wolf Prieß, Director Program Area Economics at the Joachim Herz Stiftung and Willi Scholz, Project Lead of the YES! at the ZBW – Leibniz Information Centre for Economics, the hosts explained the rules for the summit.

This year, for the first time, an extra award is handed out. A jury of experts takes a close look at the “Best Scientific Analysis” of the topics by the teams. The winning team will then also present the idea at the Federal Ministry for Economic Affairs and Energy in Berlin. 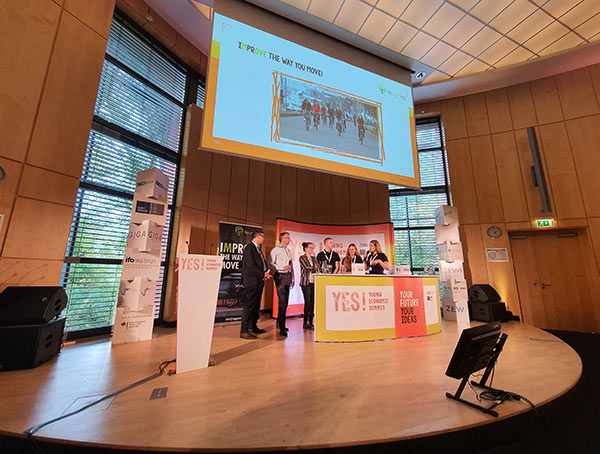 Now, all was set, and the first team was asked to take the stage and present their idea for a fair society.

Improving equality of opportunities with My2tor was the intention of the team Robert-Schuman-Gymnasium from Cham. Their idea was to create a system where students help younger students that have a social disadvantage because of their family situation.

The experts to discuss this idea were Annika Johnson from the University of Bristol and Wiebke Weger, Interims manager, who pointed out that there are very positive aspects of the idea, but they also acknowledged that it is difficult to bring such a project into life.

The second team from Gymnasium Köln-Pesch took aim at the urban-rural divide with their idea of Shared Remote Offices – enable well-paid jobs in rural areas. They introduced their own designs for such a house, including calculations, different options of use as well as their app that should help people in rural areas to connect, not only for working but also on the cultural side.

Their discussants were Shelly Steward from The Aspen Institute, Stefan Profit from Federal Ministry for Economic Affairs and Energy. They critically pointed out issues like the financing of their idea, but also praised this positive approach of the team.

After the first break, our special guests from the UK took over the microphone. This year, the YES! cooperated with the economics department of the University of Bristol. Two school teams worked out their own ideas similar to the German test. Due to a strike of the pilots, one team couldn’t make it to Hamburg. So only the team of Malvern College presented their solution to the issues that arise with a growing gig economy: SWIGE – Saving the gig economy

They discussed their idea of an app that focuses on a major issue of the gig economy with Florentyna Farghly from The Behavioural Insights Team in London and Shelly Steward from The Aspen Institute in Washington. The idea was to make the gig workers aware of the need for saving money for when they are old. In the discussion, the experts pointed out that the idea is on spot of a critical issue, but they also noted that the legal framework, for example, needs to support the gig workers better even to have a chance to save money in these often low wage jobs.

They did a great job. Since the team didn’t go through the entire competition as the German teams, they were not eligible for any votes.

With packages and the delivery problems of the last mile, we continued the presentations. The team Gymnasium bei St. Michael from Schwäbisch-Hall developed a concept they called P-Box – For Green Delivery.

After the lunch break, we learned what the word Upgreening? means. It’s the idea of the team RBZ Wirtschaft . Kiel to change the traffic in the cities of tomorrow. They want to consult companies on who the improve the way employees come to work or travel during work time in matters of health, environment and motivation.

In a lively discussion, Katja Diehl, Hans Haans from Tilburg University and Stefan Profit exchanged arguments and ideas with the team about their network, their future plans and their marketing efforts.

Next up was the question how manage the integration of refugees into your society. REFUCATION – Integration of Refugees through Education was the answer of the team Albertus-Magnus-Gymnasium Stuttgart. They want students to help refugees as part of their school agenda to improve their skills in German and maths because many refugees that start an apprenticeship often fail the theoretical exams due to missing language skills.

Jill Addo from the Federal Employment Agency, Thomas Bauer from the RWI – Leibniz Institute for Economic Research, and Panu Poutvaara, Ludwig-Maximilian Universität München & Sachverständigenrat deutscher Stiftungen für Integration und Migration, joined the stage to discuss this idea. They acknowledged the importance of such a plan and suggested several aspects to look for.

Last on the stage for the first day was a team that tackled an issue that relates to all of us. PSEC-Reform – Pension Stabilization Equity Change aims at solving the problems that come with the demographic change. They came up with calculations for a new formula to stabilise the pension system.

On the stage, our experts Florentyna Farghly, Stefan Profit, and Gert Georg Wagner, Chairman of The Social Advisory Council (Sozialbeirat der Bundesregierung) took a close look at the concept, going through the numbers and graphics and asking detailed questions to the team.

What a day that was. We are happy to see that the teams continued to work on their ideas after the regional finales, added more aspects to it and were well prepared for the discussions.

So, time to rest for all in the evening and to get ready for the second day!