Fake News is everywhere. They have become one of the most effective and most used tools for extremists, news organisations or even heads of states to influence people and their opinion. The American Election in 2016 or the activities of the ‚Alternative für Deutschland‘ are probably
the most famous examples of the usage of fake news, but many aren’t aware of the fact that fake news is used far more often, specifically in regional levels.

The concept is easily explained with the help of an example:

Let’s assume a person tweets that French President Emmanuel Macron is gay, a second person sees this tweet and doubts its veracity. So he or she decides to use Checkpoint. He or she can either send the tweet to Checkpoint’s social media sites or formulate a request on Checkpoint’s website.

The request is then processed by Checkpoint. First, an algorithm developed by Checkpoint scours the Internet for confirmed facts which provide information about the request, such as an interview with Macron or a press release.

Then, the algorithm evaluates the tweeter’s credibility based on previous tweets. If, for example, it turns out that this person has tweeted several fake news stories in the past, it is considered „untrustworthy“.

If the person’s previous tweets match confirmed facts, they will be considered „credible“. Of course, all this happens only with tweets that are newslike, objective, and do not contain personal content. If the person has not tweeted anything in the past, it is classified as „uncertain“.

If the algorithm cannot find a clear result, then human work is required. In this case, Checkpoint employees could, for example, send a request to the spokesman of Macron. In this context, it must be said that Checkpoint, of course, cannot find out the truth or make any statements with 100% guarantee, but that Checkpoint is a service that works in a journalistic framework. 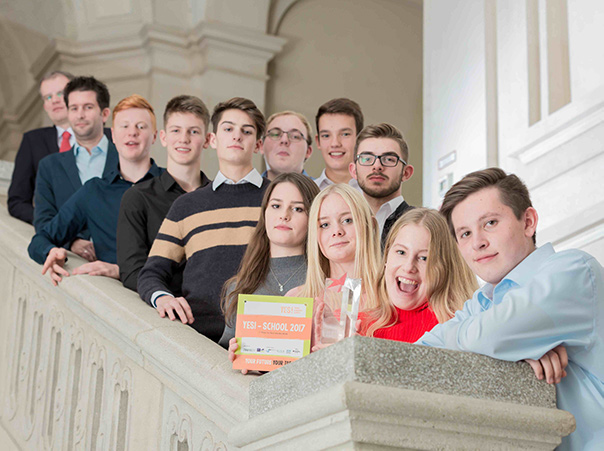 Our team from the WHG Weinheim consists of 10 pupils at the age of 16 or 17 years and our teacher. In our school, we all attend “economics” as the main subject until the Abitur, which often induces discussions about topics in this area and also forms a strong connection between all of us.

The YES! – Young Economic Summit competition, in which our school participates for the first time, is a great alternative to the regular lessons and as well an opportunity to meet people who share our interests in economics. The competitive structure makes up another reason for our enthusiasm concerning the YES! – how many possibilities do we have to compete with other schools spread over the whole nation?

Another point is the unique chance of forming connections to leading scientists in each area, who agreed to assist and advise us during our project. Our topic is “Artificial Intelligence and Digital Economy – Problems and Chances”, which is – in our opinion – complex, widely discussed and also one of the currently most important matters. For example, the election of Donald Trump in 2016 was an occasion for the massive use of artificial intelligence as “social bots”. Our aim is thus to fight their negative influence of “fake news” and social bots on the population and our democracy.