To effectively reduce virus transmission, we wanted to target the sector with the highest percentage of cases linked to it. According to PHE, 19% of coronavirus cases came from supermarkets – and this is a huge underestimate, because data came from the NHS Test and Trace App, which was mandatory in many places but not in supermarkets.

Therefore, we came to our solution: a flat tax of £10 on all in-person supermarket transactions. The survey we conducted to investigate the impact of our tax shows that this would cause supermarket visits to fall by 89% (and by 81 % relative to the 2020 lockdown) while raising approximately £600 million in monthly revenue.

There are two socio-economic groups that must be considered in more detail to avoid being targeted unfairly. To avoid harming older people who may be unable to shop online, we propose an exemption for people over 70 between 7am and 9am, the quietest hours of the day. Meanwhile, we believe low income families who might be unable to afford the tax could still shop online – in 2012, 80 % of prospective benefits claimants were connected to the internet (ONS) and this figure is rising rapidly, with 98 % of the UK online (ONS). As a last resort, however, analogue options such as telephone/filling out a form in paper for an order would be available. Finally, food banks would of course be exempt.

A key consideration in terms of the implementation of our tax is how to cope with the online order demand. Initially we would call on the army, which was also used during COVID, as part of the Military Aid to the Civil Authorities measure. Then, the tax revenue would be used to subsidise the construction of more delivery vehicles, and also in retraining schemes to increase the number of delivery drivers across the UK, many of whom would be those who had lost their jobs due to the pandemic.

Although the tax is somewhat regressive, we want to stress that it is much, much less regressive than the alternative of lockdowns, which led to a 38 % increase in unemployment (ONS), primarily in lower-skilled jobs.

We feel that the SET only negatively impacts the largest franchises, as it is not applicable to small stores or businesses. These large franchises are the best placed to adapt to the changes while still making a profit, with the supermarket giant Tesco making a £551 million profit during the first six months of the COVID pandemic alone. For nearly everyone, this tax would be much better than the lockdown alternative.

Our idea has also taken on board feedback from MPs on both sides of Parliament, making it politically feasible. This has informed and improved the SET, making it a more viable solution in the future.

So SET up for the future to save jobs and save lives. 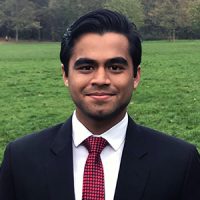